Cosplay is a great equalizer.  The only limit is creativity.  Anyone, no matter age, gender, race, or shape can dress as anyone they like. At Baltimore Comic-Con, they were out in full force.  Here’s a sampling of who was there this weekend.  These pictures reflect my personal character biases.  There were also tons of Deadpools (who all got together to dance) and Harley Quinns.  And despite the repetition of characters, almost no two costumes were the same.

These two get my best technical vote.  Robby the Robot and the Lost in Space robot were both motorized but had people perched inside.

The Avengers were also in full force.  I think Black Widow may have been the most popular costume of the day after Deadpool and Harley. 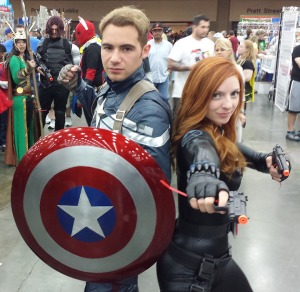 The Batman family was also well represented.  I loved this version of Nightwing.  Its similar to the Young Justice version but this guy added so great new touches. 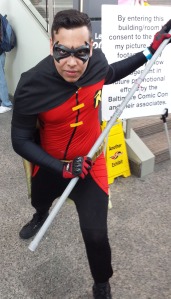 My favorite but horribly named villain, Deathstroke the Terminator, was also a popular costume with both men and women. Here’s my favorite version of the day.

With Deathstroke making an appearance, it makes sense that the TV versions of Green Arrow, Flash, and Arsenal would also show.

My favorite costume of the day was this version of Blackhawk, a character who led an international group of World War II pilots fighting the Nazis.  I can just see this guy showing up at a meeting of the Justice League and offering his services to the new generation.  Everyone else seemed like people dressed up as their favorite characters; this guy seemed like he was Blackhawk.

I was fortunate enough to make it to the Baltimore Comic-Con this weekend.  It was a great day of meeting stars, creators, and some cosplayers.

This was the first year (that I am aware of) with celebrity guests.  I was able to make the Paul Blackthorne panel.  He plays Detective Lance on Arrow.  I had no idea he’s actually British.  He handled questions from the audience with a self-deprecating humor.

BCC also featured Ming-Na Wen, best known as Agent May on Agents of S.H.I.E.L.D. and the voice of Mulan. When repeatedly asked what she could reveal about the upcoming season, she jokingly said only that it started this week and that she can’t say anymore because “they” are listening.  She also made it clear that she would love any part in the new Star Wars movies, which would complete the new Disney trifecta (Disney, Marvel, and Star Wars).

This trip my main objective was to get Brian Stelfreeze’s signature.  He is the artist on my favorite story in the book, a Nightwing/Oracle story.  He was very personable.  He talked about how, with well-known characters, the most fun stories can be the interpersonal ones (such as this story).

I also met Russ Heath, the artist on a Chuck Dixon Sgt. Rock story in this book.  He has had a long career and had his own panel at the Con.

I had Karl Story sign the book a few years ago but didn’t have the idea of taking the creator’s photos until afterwards.  He was nice enough to let me fix that error.

I also met John Ostrander, who, among other things, wrote the story that transitioned Batgirl to Oracle (Batman Chronicles .  He told me that this was one of the last stories he worked on with his wife, Kim Yale, before her death due to breast cancer.

Lastly, I got to meet Marv Wolfman, who is the co-creator of my favorite character, Nightwing.

I picked up some comics in the dollar bin.  My favorite was a tie-in to the Captain America: The Winter Soldier movie called Homecoming.  It has a fun story with Cap and Black Widow from before the movie, and also has a reprint of the Falcon’s first appearance (image from marvel.com). 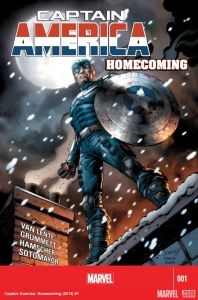 While I didn’t find any Fighter Pods (and frankly, hadn’t expected to), I did pick up an old Burger King Happy Meal version of the Jedi Starfighter.  The color looks like Obi-Wan Kenobi’s ship.  I never picked up the actual Fighter Pod Jedi Starfighter and was always bugged that it was so much bigger than the X-Wing.  This version has the small, rounded style of the Fighter Pods and is the approximately in scale with the X-Wing.  I also picked up a few Heroclix but they are for future projects and will save those for later posts.